Does the Smiley still pass the acid test? 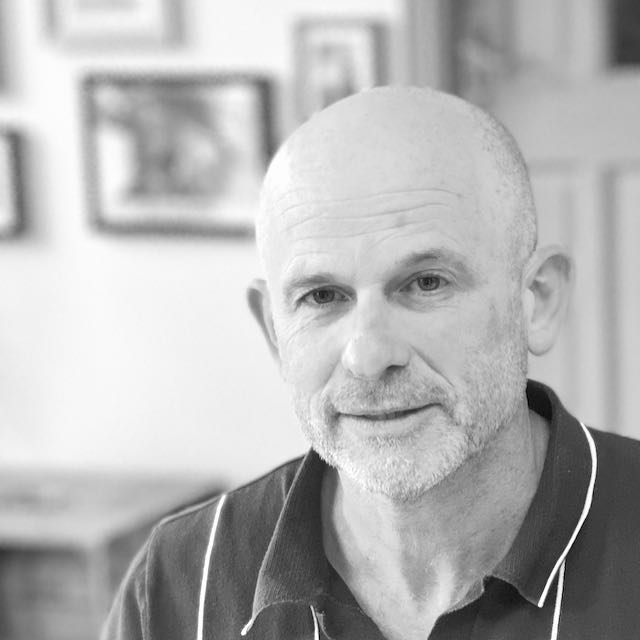 Take a long look at the smiley face below. Experience it without context or judgement, and simply appreciate what an innocent, optimistic and uplifting image it is. I challenge you not to smile back at it.

From a 1960’s PR campaign to a 2021 emoji, I’m documenting the irresistible march of the smiley. Like the saltiest of pretzels, its life and mine seem to have been plaited together by fate. I know not why but anyway, here’s that story.

A marketer (boo!) invents Smiley, then…

then you could send a Smiley to your mum (but you’d need a stamp). Eventually…

Acid House adopts Smiley, and that’s how…
Hector and Smiley first met. Which was a long time before…
Smiley went textual  ¯\_(ツ)_/¯  and then ‘smartual’ 🙂 which made…
GenZ emotional. So then…
Smiley meets the dog (and the kids), leading to
the wrinkly ravers confronting GenZ. Which allowed…
marketing (double boo) to re-capture Smiley.
At least the dog’s still smiling – The end

The smiley face symbol is so ubiquitous it’s hard to think of a time when we didn’t see it every day. It’s woven itself into the way we communicate so completely it’s probably the emoji your Mum uses. Or your Granny, depending on your age.

But it wasn’t always that way. The smiley has emerged and reemerged in various guises over the past fifty years. From PR to pop culture via acid house, perceptions and connotations have varied between the generations.

It may surprise you to know that the original yellow smiley face was created in 1963 as part of an internal PR campaign to raise staff morale in the State Mutual Insurance Company based in Worcester Massachusetts. They initially created 100 badges of the ‘Worcester Smiley’ to encourage employees to smile more while using the phone and doing other insurance tasks.

These badges went the 1960’s equivalent of viral and then the image was merchandised by a card shop in Philadelphia who sold over 50 million of them by 1971. That marked the first time you could send a smiley to your mum.

Unsurprisingly my original interest in the smiley wasn’t ignited by corporate PR. In the summer of 1989, I was 18 and had just left my provincial upbringing for the bright lights of London. I was determined to follow the coolest trend at the time and that was acid house, symbolised by the smiley.

Like all pop culture hijacks, acid house had adopted the smiley by accident.  DJ Danny Rampling wore a t-shirt with the smiley on it at Shoom, the first dedicated acid house club in London. The t-shirt was designed by a guy working for ID magazine called Peter “Barnzley” Armitage who made knock-off designer t-shirts as a sideline. Armitage was actually inspired by the breakbeats in hip-hop which often came from 70’s soul and funk records. He saw a 70’s revival emerging and thought:

"What’s the most obvious 70’s symbol? One of the first things that came to mind was that stupid smiley face." 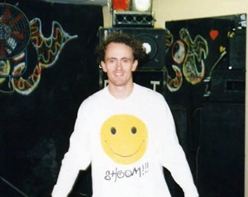 People liked the design and Danny decided to use it on the Shoom flyers, and before Barnzley and Danny could blink their dilated pupils, kids started turning up at the Shoom wearing their smiley t-shirts. As a side note, the dedicated 18-year-old me had bought one of these t-shirts, I think by ordering it through ID or The Face magazine, and duly wore it along to Shoom.

My dog made me do it: how I rediscovered the smiley 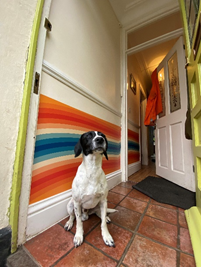 Naturally, my interest in acid house and the smiley has waned over the years, but it was reignited recently by my dog. He is not a big rave fan but he does like a good shake, particularly when he comes back from the park on a wet day. He shakes his booty violently as soon as he gets in the house which leaves the walls of the hallway very muddy and brown. To disguise this mess, I recently stuck some funky striped vinyl wallpaper on the area which looks vaguely like the sea, and I thought a nice sun above the dado rail would compliment the pattern. The available suns were boring, however, and then what came to mind was that “stupid smiley face symbol”.

But that made me ask the questions: How socially acceptable is the smiley these days? Does it still pass the acid test? Is its connection to acid house a bit sinister and narcotic? What does it mean to different generations, including Gen Z’rs, like my 12-year old son and 13-year-old daughter? They live in an emoji world but the meaning and coolness of each symbol changes constantly. Also, I was slightly concerned about what the parents of my kids’ friends will think when they drop them off for playdates?

I think the ‘wrinkly ravers ‘of my generation look at the smiley with benign nostalgia. Yes, drugs were involved with acid house, ironically it was ecstasy rather than acid. But lots of youth movements were fueled by drugs: northern soul had speed and it was the hippies who liked acid. Tragically, there is always the odd casualty when drugs are involved, but you have to remember that the alternative at the time was football hooliganism or donning a spiv suit for after-club booze-fueled punch-ups. There were a lot more casualties from these activities than from acid house. So, hopefully, the parents of kids’ friends won’t think I am some sort of spaced-out Bez character trapped in a chemical haze.

And what do my kids think of the smiley idea? My son was ambivalent but did say it was a “bit creepy”. My daughter was definitively against it but couldn’t exactly say why. But then they are neo-teenagers, so their raison d’être is to be dismissive of whatever I do. And what do they know… it turns out Justin Bieber’s clothing range Drew House is rocking the smiley!

The Z’rs in the Cohesive team had mixed feelings about the smiley. Matthew said that if he saw 17-year-olds wear it he would just think of festival fast fashion. If he saw someone my age wear it, the tragic Bez caricature would come to mind! Amelia thought of it as the original emoji, but like most common emojis it had almost become meaningless to her. Which got her thinking about 4 symbols which still carry real meaning, and how they’ve evolved over time.

The first emojis were designed in Japan in 1999 but the emojis we recognize today were designed by American designers for the Apple iPhone in 2008 and bear an uncanny resemblance to the acid house smiley. Emojis are now of course pretty common in B2C marketing. Hubspot has an Ultimate Guide to Using Emojis in Marketing. But what about B2B marketing: is it ready for emojis and will they be harnessed in a flood of post-pandemic positivity?

Emojis are already heavily used on LinkedIn and not just by individuals but big brands too. Microsoft’s marketing team leverages emojis across LinkedIn and Twitter posts regularly. They use one or two emojis in most of their posts with a significantly high level of engagement.

So, why are the marketeers at Microsoft using emojis? Because emojis increase the overall engagement level. According to Dr Linda Kaye, a senior lecturer in psychology at Edge Hill University, emojis have a positive psychological impact on us, just like the smiley at the start of this article.

"Your posts should NOT read like a casual WhatsApp chat."

Only time will tell whether we will be swept along on a deep and meaningful river of emoji PR, like a joyous plastic duck race, or we just get marooned on a tragic, floating island of single-use plastic platitudes.

My take on emojis matches Anna’s. Great when you get it right. Very easy to get it wrong. We’d recommend asking your GenZs to vet everything and never, ever take anyone’s written guide (out of date almost before you press ‘save’ – sorry Hubspot) as gospel.

As it happens I did put the smiley face up. Midlife crisis or a ray of sunshine… you decide. Hopefully, it will bring a smile to most people’s faces and, as you can see, the dog is truly ‘mad for it’! 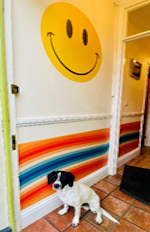 Going for gold – The keys to a successful PR strategy